There are SO many things to catch up on, I wasn’t quite sure how to begin this post. I must have rewritten this a dozen times, until I finally decided to just start with the truth.

And then give you chocolate, so stick around.

But the truth is, I couldn’t even think about writing this post until this very day, Sunday March 15th. Until now, I couldn’t force myself to sit down and put the whole story down, from beginning to end, without disappearing in a pool of tears.

I’m talking about Jaxson, my handsome 10 month old Pitbull mix, and the last few months that I had with him. I had originally introduced Jaxson and his story last year, posted here. Shortly after that post was written, Jaxson’s health declined severely overnight, and he was rushed to the E.R. He was then diagnosed with gastroesophageal intussusception, in addition to the megaesophagus. Jaxson went through surgery immediately to remove his spleen and stomach from inside of his esophagus, pinning the organs back in place. He recovered SO well, and even the symptoms from his megaesophagus seemed to be less of an issue than before. 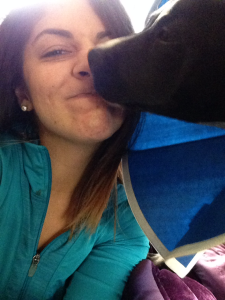 3 days in the ER, without Mom = lots of kisses! 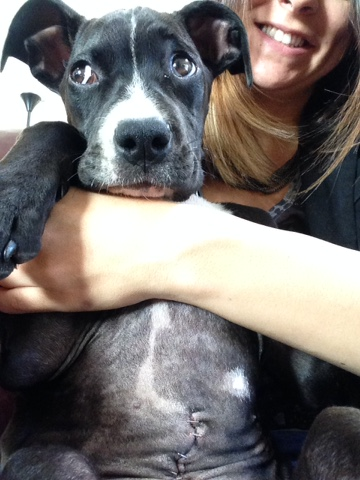 Until January. This is the rest of his story.

2015 started off pretty rocky for Jaxson. Being the mischievous little guy that he was, he found ways to get into and eat things that he wasn’t supposed to be eating. For a normal dog, this probably wouldn’t be a huge deal. It might cause an upset tummy for a day or so, and then all would be well. For Jaxson, this set off periods of a very inflamed esophagus and digestive track, with him constantly regurgitating his food and water. It was an ongoing struggle to keep weight on him, keep him hydrated, and maintain his overall health. I had to get creative with his feeding schedule, switching from 3 small meals to 4 smaller meals. I played around with the consistency of his food as well, from soup like meals to blending his food and making dog food meatballs, and so on. 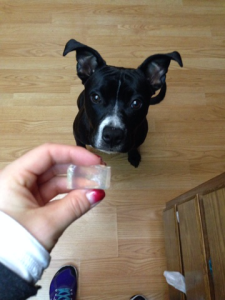 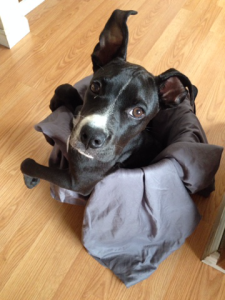 Elevated feedings, aka puppy in a can!

Jaxson eventually grew out of the “puppy in can” method, so Matt and I took a weekend and made him a bailey chair (like the chairs you see here). The Bailey chair keeps him upright during and after a feeding, using gravity to help pull the food down to the stomach. 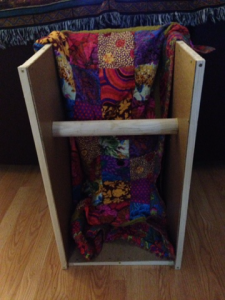 Despite all of the regurgitation, experimentation, and a countless sleepless nights, Jaxson acted like a normal, happy puppy. Sure, there were a days that I knew he was uncomfortable. But 90% of the time he was active and playful, wagging his tail and being his adorable, lovable self. That was my boy, he was such a trooper! 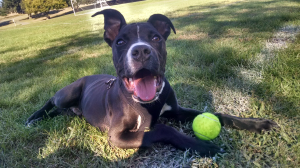 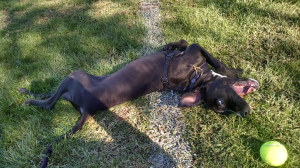 I thought we would eventually get through this weird period of constant sickness. We made some progress here and there, but it seemed that for every step we took forward, something would happen and we took another two steps backwards. But during the first week of February, things got even worse. The regurgitation became so constant, that more food was coming out than staying in. In two weeks and a few vet stays later, Jaxson had lost over 10 lbs. and almost nothing was working to keep food and water down.

On Friday, February 13th at about 2:30am, Jaxson started throwing up blood and was rushed to the vet. The next 10 hours were the most painful, miserable, devastating hours for both Jaxson and I. He was in so much pain, the medications weren’t working, and our options were very limited because of how fragile he was. I was prepared to do anything, spend anything, commit to any type of routine, just to make him better again. I waited at home while they ran tests to figure out what was happening in that little body of his. I finally received a call from our veterinarian, Dr. Sandy Block, from Bollinger Canyon Animal Hospital. They did everything they could, but simply put, Jaxson’s organs were failing and he was dying. I had to make the hardest decision of my life.

At approximately 12:30pm on that Friday afternoon, Jaxson passed away in my arms.

There are no words to describe the devastation I felt from losing Jaxson, and the guilt that comes with making that kind of decision. I’m sure anyone who has put down a pet can relate to those feelings.

I received the autopsy results later that evening, and was reassured that the right decision had been made. Jaxson didn’t deserve to suffer any longer.

We were so lucky to have Sandy Block, as well as the rest of the staff at Bollinger Canyon Animal Hospital, throughout this whole process. They were so caring and attentive to Jaxson, making him as comfortable as he could have been during each visit, and also at the end.

I am also so very grateful for my incredible boyfriend, Matt. 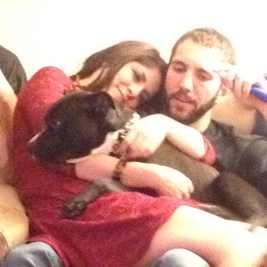 Matt and I started dating shortly after I first brought Jaxson home, and has been there for us through every step of this journey. He was my rock when I was feeling stressed, overwhelmed and hopeless over Jaxson’s condition. Most importantly, he was there for all the special, happy moments in Jaxson’s life. He loved Jaxson just as much as I did, and Jaxson loved him equally back. 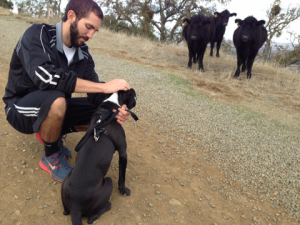 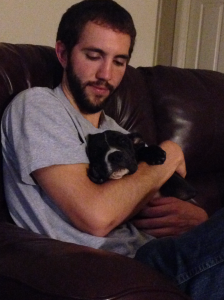 I miss my sweet little boy every single day. I miss the way he would come prancing around the corner when I came home from work, ears up, looking like the happiest little puppy alive. I miss his snuggles, his puppy kisses, and the way he would bop his nose against mine, as if he was reassuring me that he was okay. 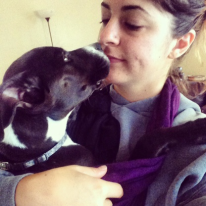 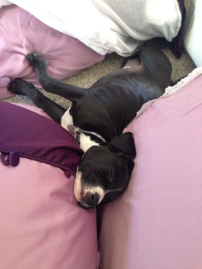 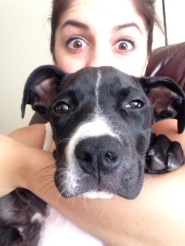 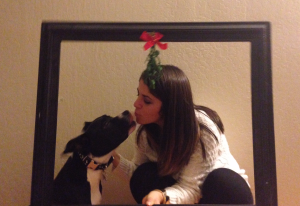 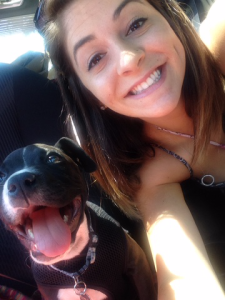 It’s been the hardest month without him. But it does get easier every day.

Jaxson’s health conditions required a lot of research on how to care for a dog with special needs. I learned that megaesophagus in dogs is not rare, and there are so many resources out there for families who are dealing with the same issue. Jaxson’s case was severe, and his other health problems contributed to the overall decline in health. But there are so many dogs with MegaE that live a normal, happy life because their owners learn how to manage it. It can be tough at times, but these dogs deserve a shot at life, just like any other dog. If you have the time and ability, I ask you to put aside a few minutes and look into the following individuals and organizations who are dedicated to helping the animals and families affected by MegaE.

Matt and I are planning on donating Jaxson’s bailey chair to a family in need, and customizing it to fit the special pooch. Due to the size of the chair and costs involved in shipping or personally transporting it, we would prefer the family be in California. If you, or anyone you know, are in need of a Bailey chair, please contact me at cavegirlculture@gmail.com with the dog’s measurements.

Thanks for reading Jaxson’s story and following along on our journey. I promised chocolate at the end of the story, and I definitely don’t want to disappoint. Plus, everyone knows that brownies heal the heart. I’m pretty sure that’s science right there. 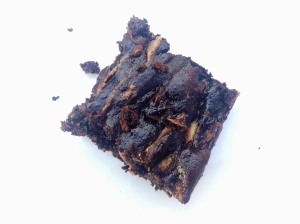 Scoop out the almond butter (remember to reserve 3 tbsp. for the swirl) and maple syrup into the mixer/mixing bowl and stir on low for about 30 seconds. Add the cocoa powder by 1/4 cup increments and combine with the almond butter and maple syrup on a low speed, otherwise the cocoa powder will go everywhere. Mix in the remaining ingredients – with the exception of the bananas – and mix on a low to medium speed until all ingredients are mixed in well.

The batter will be dark, gooey and hard to resist. You’ve been warned. Set aside (like far way from your mouth) while you work on slicing the bananas. The banana slices shouldn’t be too thin because you don’t want to lose them in the brownies. Once you’re done slicing the bananas, take out the glass baking dish and grease it down with the coconut oil. Then take the brownie batter, and spread about half of the batter into the dish, smoothing it down for an even layer. Lay out each banana slice over the layer of brownie batter, to cover that bottom layer completely. Then, spread the remaining brownie batter over the banana slices. In a perfect world, the bananas would stay in place as you spread the top layer over, but the brownie batter is pretty sticky and gooey. Expect them to move around as you spread out the batter, working to smooth it out across the pan.

The last step before putting it in the oven is to make the almond butter swirl. Take a butter knife and dip into the reserved 3 tablespoons of almond butter and swirl it through the brownie pan. Continue to dip and swirl until all the almond butter is gone. Once you’re satisfied with the swirl in your dish, pop the pan into a preheated oven at 350 degrees (F), for about 18 minutes. As always, stick a toothpick or butter knife in the center of the pan to check if it’s done. If it comes out clean, you’re all set! 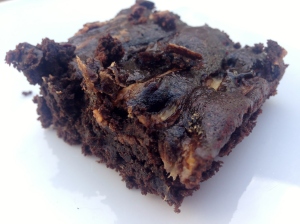 This combination of chocolate, bananas and almond butter work together just beautifully.

Elvis would be proud.

For more of Jaxon’s adventures, search the hashtag #jaxsonstrikesagain on Instagram.

While you’re there, be sure to follow me @cavegirlculture to keep up with the latest adventures and recipes.